Donald Trump has accepted a personal invitation from the North Korean leader Kim Jong-un to discuss the possible denuclearization of the Korean peninsula, but also has vowed to keep sanctions in place until a firm deal is reached.

Following the latest round of successful negotiations between the two Koreas this week in Pyongyang, Kim Jong-un sent a personal invitation to the American leader to discuss improving bilateral ties. After months of saber-rattling between the two leaders, Trump agreed to meet the North Korean leader by May, South Korean National Security Adviser Chung Eui-yong announced at the White House on Thursday, after delivering a letter from Pyongyang to the American leader.

Kim Jong Un talked about denuclearization with the South Korean Representatives, not just a freeze. Also, no missile testing by North Korea during this period of time. Great progress being made but sanctions will remain until an agreement is reached. Meeting being planned!

Trump confirmed the announcement on Twitter, noting that “Kim Jong-un talked about denuclearization with the South Korean Representatives, not just a freeze,” earlier this week. Revealing the context of the intra-Korean negotiations which led to the invitation, Trump added:

“Also, no missile testing by North Korea during this period of time. Great progress being made but sanctions will remain until an agreement is reached. Meeting being planned!” 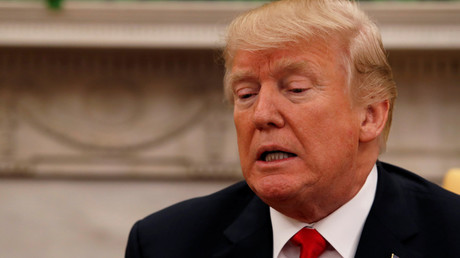 Prior to accepting Kim’s invitation, Trump held a phone conversationwith Japanese Prime Minister Shinzo Abe, in which the leaders as usual agreed to apply maximum pressure on North Korea. Abe plans to visit the US in April ahead of the proposed meeting between the North Korean and US delegations.

Confirming Trump’s acceptance of the invitation to meet Kim, the White House stressed that the place and time of a US-North Korean encounter is yet “to be determined.”“We look forward to the denuclearization of North Korea. In the meantime, all sanctions and maximum pressure must remain,” press secretary Sarah Sanders added.

Announcing the monumental breakthrough in the Korean stalemate, Chung Eui-yong noted that Kim Jong-un is now “committed to denuclearization,” and has “pledged” to refrain from any further nuclear or missile tests until talks with Trump take place. Surprisingly, Kim also made concessions towards the never-ending joint US-South Korean drills, which have greatly contributed to the ongoing tensions in the region. “He [KIM] understands that the routine joint military exercises between the Republic of Korea and the United States must continue,”the Security Adviser noted during his announcement. The South Korean official further credited Trump’s leadership and the US policy of “maximum pressure” for bringing North Korea to the table.

The Korean peninsula has been divided since 1953, after an uneasy armistice suspended the bloody, three-year conflict between the Communist North and the US-allied South that, at one point, involved both US and Chinese militaries. Last month, North and South Korean athletes competed together at the Winter Olympics in PyeongChang.

Despite the unprecedented level of negotiations between the two Koreas, which began with Kim’s New Year address seeking better ties with Seoul, Trump’s administration has put massive military and economic pressure on Pyongyang in recent months. On February 23, the US introduced a new package of sanctions on North Korea. Trump also repeatedly warned that, if sanctions do not work, the US will look at a “phase two” of action against Pyongyang.